How I Became Known As Wolverine

I am an artist and animator by trade. I was quite a healthy person all of my life. I was never overweight (everyone complained I was too skinny), had no known allergies and was rarely sick, other than an occasional flu.  Even those were rare and I usually got over them in a shorter period of time than most people.  At the age of 48, I did develop a touch of colitis, for reasons unknown.  My primary care physician said that I had become a bit anemic from blood loss and suggested that I go to the hospital to receive a transfusion.  While in the hospital, I allowed a gastroenterologist to convince me to undergo a colonoscopy, both for the colitis and because I was at the age that medical professionals recommend people to begin cancer screening.

My colon was perforated during the procedure.  Refusing to even entertain the idea he could have possibly made a mistake, this cynical moron kept insisting the pain I felt was just a typical discomfort from the procedure and told my wife I was just exaggerating to get pain-killers.  Over the next hours the pain became excruciating, so the mad doctor decided to pump me up with dilaudid. 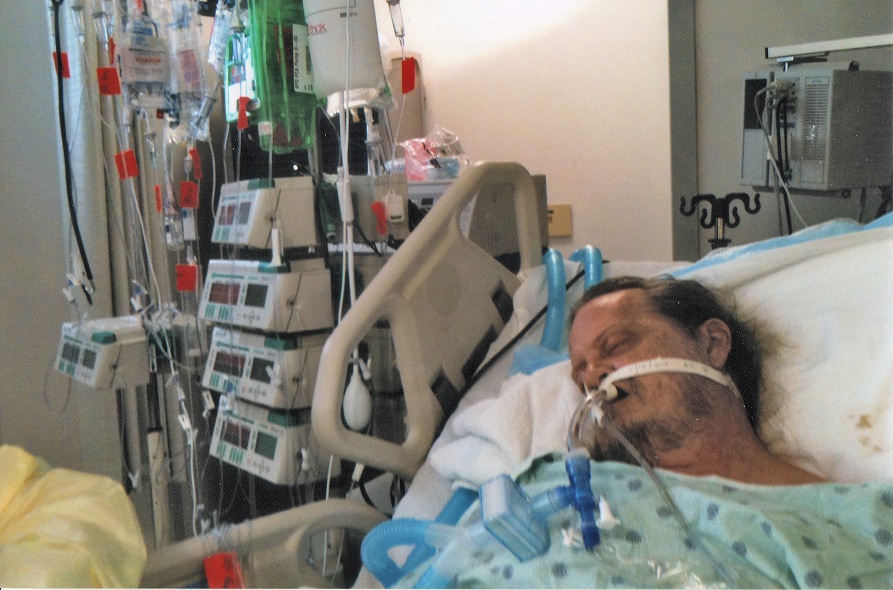 As my conditioned declined over the next couple of days, I was finally moved to the ICU.  This was a rural hospital in the small town of Clermont, 30 miles west of Orlando, and they were ill-equipped to handle such a critical case.  My vitals were crashing as my resting heart rate exceed 150 bpm and my blood pressure dropped.  My white blood cells had elevated beyond 66,000 and these country buffoon doctors were unable to diagnose what was killing me.

South Lake Hospital is part of the Orlando Health system and are equipped with a helicopter to transport critical patients to ORMC, a trauma hospital in Orlando, where trauma surgeons are on staff 24/7.  The hillbilly doctors of South Lake refused to transport me, even at my family’s request, and instead opted to wait the 17 hours it took for their “on-call” surgeon to casually stroll in for emergency surgery.

I was finally taken in for abdominal surgery, where they found that the infection from the site of the perforation had spread to the small bowels over the three days I was ignored.  The ensuing peritonitis had strangled the small intestines, which became necrotic.  Just hours from death, they decided to remove all of my intestines, with the exception of about three feet of jejunum.

Over the next week, my wife began to complain to the mentally challenged  doctors of South Lake Hospital that the stoma was inactive and dark in color.  The surgeon insisted it looked fine and would get brighter over time.  Luckily for me, I was transferred to ORMC a day later for a vascular procedure that these bumkins were not equipped or trained for.  Though the procedure was successful, the vascular surgeon said it was of little consolation, because in his opinion the stoma looked dead and if not treated immediately, I would be soon be dead.

He contacted the original surgeon at South Lake and consulted him about the stoma.  The surgeon still insisted that the stoma was fine and warned the surgeons at ORMC not to intervene and give it a few more days.  Shortly after that call, I began to have seizures and went into septic shock.  I was rushed in for emergency surgery where they found that the three feet of jejunum behind the stoma had died and begun to liquefy.  The surgeons gave me little chance of surviving the night because of the severity of the shock, but someone forgot to tell me.

I now had less than 10 inches of intestine, not nearly enough to live on.  Over the next six months I was kept alive by intravenous feedings of TPN and hydration.  I didn’t have enough small bowel to even absorb water.  When I became dehydrated, instead of drinking, I had to turn up the pump on the hydration fluids.  This sounds simpler than it was.  When you’re thirsty, every instinct you have tells you to drink.  But drinking would raise the ostomy output and only dehydrate me more.  I lived in a perpetual state of thirst.

After returning home, I was assigned a home nurse who would attend to my TPN, hydration and care of the surgical wounds.  With each visit, she would marvel at the rate at which my surgical incisions were healing.  She began to refer to me by the pseudonym Wolverine, after the Marvel character from the X-men, who possesses the ability to quickly regenerate from mortal wounds.

I received a very rare full intestinal transplant on March 23, 2010 at Jackson Memorial Hospital in Miami.  Less than 3,000 had ever been performed and few people ever survived them for the first couple of decades they were attempted.  There are probably less than 1,300 survivors of this organ transplant.

In the months following, I would succumb to septic shock from infection, which placed me in a coma for two weeks.  By the time the ambulance arrived at the ER, my blood pressure had dropped to 35/28 and the doctors were fitting my wife with a black veil.  No immunosuppressed patient had ever survived that strain of pseudomonas in that particular hospital.  I was the first and only to date.

The medical blunders would not cease, and my right lung was punctured while being intubated in the ICU.  Defying all the doctor’s predictions, I survived this gram negative rod systemic infection while simultaneously fighting a deadly  pneumothorax.  After recovering from the infection, I still had three chest tubes inserted into my side to release the air leaking from the right lung.  The lung would eventually require a resection to repair the damage raising the total of chest tubes inserted to 5.  The cardiothoracic surgeon was reluctant to perform the procedure, claiming that the damage from all of the chest tubes were most likely not mended because the immunosuppressant drugs would slow the healing process. 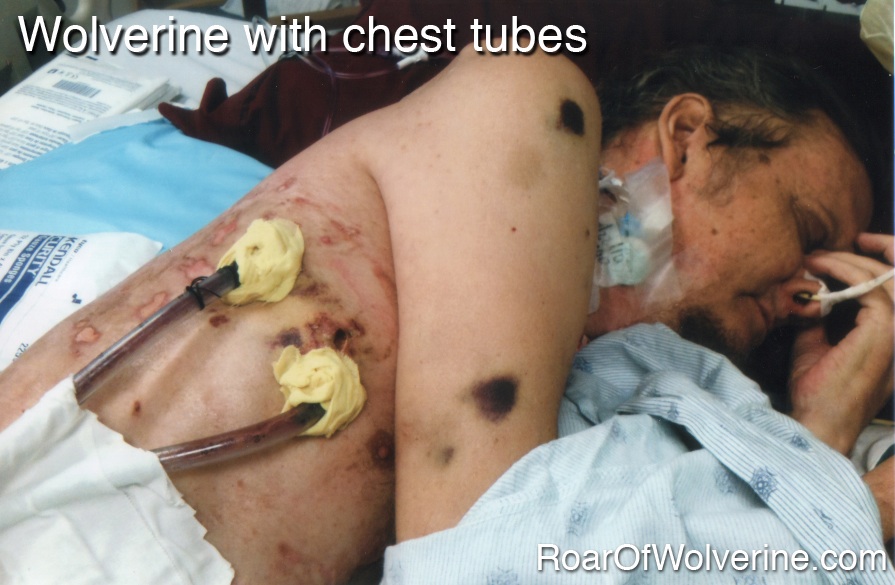 The pneumothorax worsened, so a thoracoscopic surgery had to be performed.  The surgeon was amazed when she got inside and noticed that all of the prior wounds from chest tubes had scarred over already.  Though she had predicted five weeks for the hole in the lung to close, I healed from the surgery in about two.  She also began to refer to me as Wolverine.  Many of the doctors claim that my rate of healing was still faster than someone who is not on immune suppressant drugs.  No one can explain it, but if it weren’t so, I wouldn’t be alive right now. 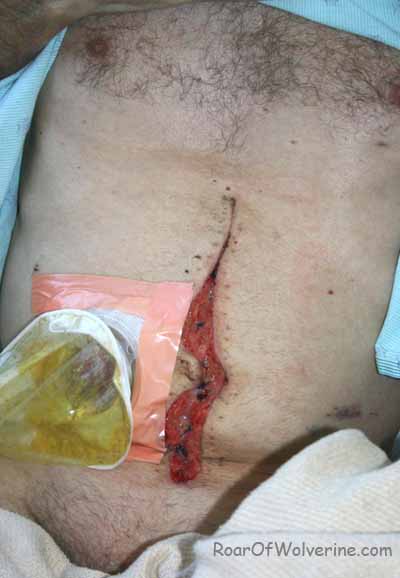 You will often read articles referring to my medical experiences in many of my rants.  I feel that through my experiences, I can bring a unique perspective to the debate – a knowledge that no amount of education could prepare you for.  Many of the other transplant patients I met at Jackson did not survive – it is a very risky procedure with about a 60% survival rate in the first year.  The fact that I heal fast, received a perfectly matched organ and my change in diet have allowed me to return to a fairly normal life.

My dietary choices are contrary to what the doctors recommend, yet I have recovered faster and more completely than other transplant recipients who follow the doctor’s recommended diets.  All transplant patients are placed on 8-12 different medications.  I only take two – the anti-rejection drug, prograf, which I’ll have to take for the rest of my life and an antibiotic, bactrim, as a prophylactic for pneumonia.  I was able to drop all other drugs prescribed to me by the doctors because of my lifestyle changes.  This is remarkable given the fact that the average american takes 11-12 medications – and that statistic only accounts for prescription medications, not OTCs.  How is it that an intestinal transplant patient can be healthier than the average american?  I certainly take less medications, so it must be true.

Given all statistics and known mortality rates for all of the conditions, systemic infections and procedures I have encountered – I shouldn’t be alive.  I am not sure how or why I survived these things.  I am also not sure how much longer I have to live, so I wish to share my story and other thoughts with you before I go.

This is the story of how I became known as Wolverine.

Some of the most popular posts based on my transplant and related medical experience are:

“The Effect Of Sugar On Arteries”

“The Truth About Soy”

“The Dangers In Modern Medicine”

“The Dangers Of Colonoscopies”