The Evolution Of Missile Weaponry 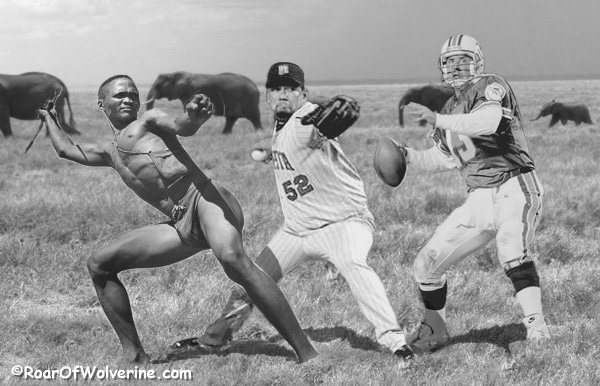 The meat most often associated with baseball is that highly processed tube filled with meat by-products and cereal, better known as hotdogs.  But, there may be a greater connection between sports and fresh meat not so often correlated.   I am speaking of the ability to project missile weapons, in an overhand motion, with deadly accuracy.  It all may have started with sticks and stones, but the weapons would become more and more lethal as new designs were implemented for distance, accuracy and the amount of damage they could inflict.

An otter will use a rock as an anvil to crack open a clam shell and a chimpanzee is capable of manipulating a twig into a termite mound and withdraw the attacking soldiers for a quick snack.  But, only one animal ever displayed the ingenuity required to conceive of lashing the rock to the stick to create a much more effective tool; and that is man.  The ability to “create” something that never before existed from raw materials is solely human and may have been driven by the need to acquire meat.  I understand that this is in no way definitive, because it could have been evolved for defensive purposes or for the need for social interaction.  Yet, the ability to project a missile weapon  required a tremendous amount physiological changes within the brain, nervous system and muscles of the human to achieve this feat.

There is a sizable part of the human brain dedicated to this deadly skill.  It also requires a tremendous amount of extra neurons and small muscles to achieve, yet even children as young as two years old begin to develop this ability.  Young children have a desire to throw objects, whether it be rocks, toys or sports equipment.  The drive to develop this inherited skill is so strong, that we have literally invented hundreds of competitions to display our superiority at it.  Whether it be a baseball, basketball, bowling ball, darts or javelins, humans spend most of their lives honing and refining this age-old technique.  Could a talent now used for recreation and entertainment be steeped in a necessary skill once paramount to our survival?

Chimpanzees are several times stronger than humans who are twice their weight.  Many scholars believe that the reason for this is because humans sacrificed the superior strength of other primates in exchange for muscular finesse.  We have much greater small muscle control than any of the great apes.  With an ape, muscle contraction is all or nothing, with very little dexterity when compared to humans.  Humans have many times the amount of nerve communication to the small muscles than apes, which results in less overall strength, but greater control.  For more details read this study “The Secret To Chimp Strength“.  The video below is a perfect exhibition of how inept a chimpanzee is at the small muscle control necessary to wield or toss even a simple weapon.

Notice how the chimp attempts to use the club with an underhand, rather than overhand, swing.  His thumb is much too underdeveloped to hold the stick with the authority necessary for multiple swings and he loses grip easily.  Even though chimpanzees are hunters, they use their bare hands and teeth as their only weapon to dispatch monkeys.  Even a group of adolescent humans could have pelted the cat with projectiles from a much further distance, giving the predator no choice but to flee or die.  For what reason would a human have the need for large canine teeth?   Claws and fangs are a greater health risk because they can be broken off during battle?

Was this simply a skill developed for defensive purposes in the manner that the chimps in the video are using it?  I don’t believe so.  Why would an organism expend so much brain, nerve and small muscles in order to turn a rudimentary skill into an art form, when simply climbing a tree or retreating would accomplish the same safety without so many complex cybernetics created?  Nature is always much more efficient than that.  It is more reasonable to assume that this ability was acquired so our ancestors could stand their ground, rather than flee.  Children could be lifted and carried to safety, so it is more reasonable to assume that this skill set was used either to defend a kill or chase a predator away from its victim.

It may well have started as a means of frightening a predator from its prize, but once the hominids realized that they could defeat the largest predators and steal their groceries, it wouldn’t be long before they would decide to just make the kill themselves and get the freshest meat.  When humans had mastered the fine art of missile weaponry, we became the apex predator and nothing could stand against us.  Sprinting speed is not necessary when you can deliver a terminal wound outside of the striking distance of the quarry.  This is why humans have never needed speed, power or large teeth and claws to be the most effective hunter this globe has ever seen.  Our nutritional intake is thereby directed to the feeding of our massive brain, rather than the maintenance of large muscles, teeth and jaws.

In the series “I Caveman”, televised on The Discovery Channel, Robb Wolf was able to inflict a mortal wound on an adult elk from a distance of over thirty yards with only the use of an atlatl (one of the most primitive weapons used by paleolithic man).  Video here.

The elk is an animal much larger, faster and more powerful than a human.    Even the largest lion would take great risk attempting to dispatch a full-grown elk alone, and would probably decide to look for a smaller calf.  Humans are the only hunter that consistently seek out the largest and strongest prey, rather than the small, weak and sickly.  If another predator breaks a tooth, fang, claw or bone, their survival is in severe jeopardy.  Whereas a human can simply replace our weapon with a new one and perhaps improve on its design.

Being able to hit your opponent from a great distance is far more frightening than any muscle, claws, fangs, horns or stingers.  This may also be why nearly every animal on earth seems imprinted with a natural fear of humans.  Distance and accuracy are far more terrifying than speed and power.  The U.S. has the most feared military because we are capable of striking the most damage from the farthest distance with frightening accuracy.  This technology will always usurp large numbers and infantry prowess.

It really irritates me when I see these rash of survivalist programs on television, where the host proclaims that they are in an area where they are no longer the “top of the food change” or the “apex predator”.  This can only be done for drama.  Yes, there are times when an animal can ambush an unprepared human, but this never makes the human less than a top predator, because even lions are killed or injured by zebras on occasion and crocodiles are trampled to death by wildebeest.  With some simple rocks, sticks and vines, any human will devise the deadliest of weapons and traps, capable of killing the most ferocious predator or prey anywhere.  Stone age humans hunted much larger and more powerful game than anything alive today, and were so efficient, they hunted many of them into extinction.  They were able to out-compete cats twice as large as any feline living today, all strictly by the ability to strike with lethal force from a safe distance.

We can take this theory even further.  Creating an accurate projectile tossing mechanism to hit a stationary object would be far less complex than evolving one that is capable of hitting a moving object.  Humans have the incredible ability to judge speed, distance, wind and gravity, then almost instantaneously make the precise calculations to lead their target to collide with precision.  Then that information is relayed to a multitude of opposing muscles, even to the point of adding a spin on the missile object to give it better accuracy and distance.  Many baseball pitchers have mastered the art of making the projectile hook, arch, twist or curve.  Is that just an expression of the smelly ape sticking a twig in a hole?

It likely started with sticks and stones, but it was this rudimentary skill set, coupled with the creative ability to combine elements for more effectiveness, that led from spears to slings to arrows.  The same skill is necessary to operate even a firearm with accuracy.  With their lack of dexterity, a chimpanzee could not operate a firearm and would most likely shoot themselves in the foot.   The inbred need to hone this skill is so overwhelming that we have created many recreational outlets for it.  On any given Sunday, an NFL quarterback echoes the evolution of our ancestors when he eyes a speeding receiver forty yards downfield and in an instant considers the wind direction and velocity, the amount of force and spin to put on the ball.  He then heaves it in an overhand motion, allowing gravity to create the perfect arc to meet the racing player at a precise point on the field.  Nature certainly didn’t create a mind capable of so many calculations and fine muscle control just to win a football game.  This complex machine was created for the original purpose of acquiring our dinner.

Humans are not only good hunters, we are the most efficient and frightening hunter earth has ever produced.  If T-Rex was still around when humans came into being, he would have certainly been hunted to extinction by now.  Never let anyone convince you that humans are anything less than the most efficient  hunter based on the fact that we lack large canines, claws, power or great speed.  Think of the story of David in Goliath.  The heavily armored giant had the superior strength and longer reach than the diminutive Shepard, but, it was his skill at missile weaponry (a sling) that more than leveled the playing field.

Just because some vegan’s ancestor was too much of a pussy to hunt anything more dangerous than an apple, does not mean the rest of us are not descended from brave hunters who passed on their missile projecting genetics to the rest of us.