The Planet That Went Ape!

This is really not a movie review. I just wanted to use the idea in this film as a springboard to discuss why the vegetarian ape cannot support a human sized brain, as this ill-conceived movie suggests, and why humans evolved to eat meat.  Unfortunately, this newest fiasco in the science fiction film series, “The Planet Of The Apes” attempts to create a scenario where scientists increase the capacity of the simian brain to human proportions virtually overnight.  The writer makes the same erroneous assumption that many vegans and vegetarians do – that humans and apes are exactly the same physiologically.  But could a chimpanzee’s or gorilla’s body support the energy-hog that is the human brain?  Could the human brain have evolved on the raw vegetarian diet of the apes?  Is it simply just a matter of giving an ape a larger brain to create our worst adversary?  Let’s take a look at the internal differences of an ape to a human.

First, we have to look at the digestive system of the great apes, which include gorillas, chimpanzees, orangutangs and bonobos.  Though vegans and vegetarians insist that humans are herbivores because we externally resemble apes, internally we are significantly different.  They continue to argue that humans and apes have a similar overall length to their intestines.  This is true, but there is a huge difference in the way the gut is distributed.  The following graph illustrates the wide variation in the amount of foregut and hindgut in man and other primates: 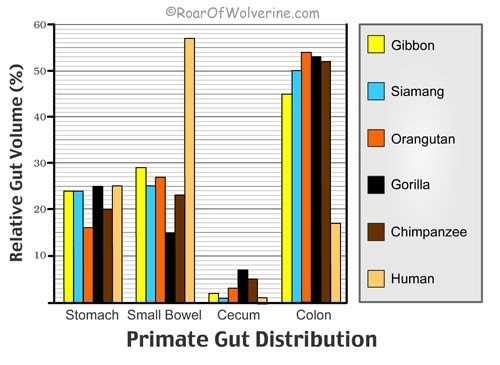 Humans have a much longer small intestine for nutrient absorption and a shorter hindgut (cecum and colon) for the fermentation of vegetable fibers than do other primates.  The distribution of intestines are completely opposite of one another.  This fact disproves the idea that apes and humans have the same gut length and therefore share similar dietary needs.  There is obviously a huge difference in the ancestral diet between man and ape to explain this dramatic difference.

Apes have a much larger hind gut for the fermentation of plant foods.  No mammal on earth can digest plant cellulose, so herbivores depend on gut bacteria to break down the plant cells and then absorb the fatty acid by-products via the colon (read my post “Only One Mammal Survives On Low Fat Nutrition” for more on this).  The human colon is capable of very little nutrient absorption.  It is predominantly used for water absorption to help recycle fluids lost in digestion.  The human hind gut can only supply about 10% of the energy requirements for our body, whereas the ape’s hind gut provides about 65% of their energy needs.  It is possible for a human to live without a colon as many cancer and Ulcerative Colitis patients have proven after colectomies.  Apes on the other hand, will die if their colon is removed.  I personally have only about ¼ of a normal colon (11 inches transplanted, 10 inches native) and I am living just fine.  An ape couldn’t survive on the small amount of hind gut I am left with.

Apes do not live in the rainforests just to avoid colder climates.  Many tribes of mountain gorillas endure extreme cold temperatures.  They never migrated out of the tropical forests because it is the only place where there is enough fruit and vegetation available year round to support their massive bodies. Chimpanzees are primarily frugivores and gorillas are more vegetarian.  The apes in the movie take up residence in the California Redwood Forest – an idea that is completely ridiculous.  There would not be enough wild fruit and non-toxic vegetation year round to maintain their body’s nutritional requirements, much less their newly acquired, virus induced larger brain.  Humans began migrating out of the forests and populating the globe only after we had adapted to the food that is available virtually everywhere – meat.  The Inuit people thrived in icy areas where little vegetation grew, but meat and fish were abundant.  An ape (or vegan) wouldn’t last a couple of days there (sorry Yeti believers).  In order for an ape to support a human sized brain, there would have to be some serious physiological changes made to their digestive system.

According to Kleiber’s law, it would be impossible for an animal to meet the energy demand of a human size brain and an ape size gut.  The colon is an extreme energy hog.  It generates a tremendous amount of heat when fermenting vegetation.  Hominids had to sacrifice the large colon of their predecessor, who probably more closely resembled the vegetarian Australopithecus, in order to spare the energy required to support a larger brain.  You can’t have your cake and eat it too, yet the writer of this drivel thought that apes could have both.  Even if the ape could intake enough dietary calories to support a human size brain and an ape size colon, their body temperature would become dangerously high from the calorie expenditure.  The human brain gobbles up over 25% of the calories ingested, whereas the ape (and probably vegan) brain only uses about 8% of their energy intake.

The ape must maintain a smaller brain in order to feed the massive colon necessary to survive on a low nutrient diet of vegetation.  The image below illustrates the differences in skeletal structure between a man and chimpanzee.

If we follow the angle of the ribs, we can see that the chimpanzee’s abdomen flares out into a more pear-shaped figure.  We also notice that the pelvis is a taller bowl to hold the massive amount of hind gut.  The human rib cage angles inward towards the hips, creating a more wedge-shaped torso and flat stomach.  The large pear-shaped abdomen seen on some people is an accumulation of fat around their waist and not intestines.  The gorilla’s pot belly is not fat, but a huge, gas-filled colon.  The fermentation of cellulose creates a lot of flatulence in the ape and vegan colon.

As unlikely as it is that a virus could enlarge the brain of an ape, it is even a further stretch to assume that the virus could also restructure their entire digestive tract, shortening the colon and cecum, and increasing the size of their small bowels.  It took a couple of million years for humans to make this adaptation.  The option of eating nutrient dense meat is quite suicidal for apes, especially gorillas.  According Finch and Stanford in their quarterly “Meat-adaptive Genes And The Evolution Of Slower Aging In Humans”, it is proposed that the evolution of the apolipoprotein E 3 gene, may provide humans protection from diseases suffered by apes when consuming meat. [PDF]   The following is a quote from the abstract:

…Chimpanzees eat more meat than other great apes, but in captivity are sensitive to hypercholesterolemia and vascular disease. We argue that this dietary shift to increased regular consumption of fatty animal tissues in the course of hominid evolution was mediated by selection for “meat-adaptive” genes. This selection conferred resistance to disease risks associated with meat-eating also increased life expectancy. One candidate gene is apolipoprotein E (apoE), with the E3 allele evolved in the genus Homo that reduces the risks for Alzheimer’s and vascular disease, as well as influencing inflammation, infection, and neuronal growth. Other evolved genes mediate lipid metabolism and host defense…”

So switching to a meat based diet is not in the cards for the apes anytime soon because Alzheimer’s and heart disease would overcome them quickly.  An ape army would have a real logistics nightmare having to carry tons of vegetation from battlefield to battlefield.  Instead of spending time planning their strategies for the overthrow of man, they would continue to eat and poop every waking hour of the day to obtain their nutrition from their low nutrient diet.   Not a very formidable foe.

I know folks will tell me to lighten up and enjoy the movie because it’s only science fiction.  My purpose of this rant was not to disprove a ridiculous movie storyline, but to use it to disprove a popular piece of vegan propaganda.  Hominid brain growth was the result of a shrinking gut, based on a diet of nutrient dense meat, and the larger brain would later lead us to better food preparation.  Grinding, cooking and even the fermentation of food made digestion and the extraction of nutrients much easier and therefore required less intestines for internal processing.  More of our absorbed food energy could then be routed to the brain, rather than the gut.  Humans had to first grow their brains from meat consumption before we could have the intellect to discover fire, agriculture and food processing to make nutrients more accessible from plant foods.  The modern vegan would not be possible had humans not first thrived on meat.

Hollywood, being the Mecca of vegetarianism and other pseudoscience, found this movie to be quite plausible.  The film’s director Rupert Wyatt was quoted as saying;

I think we’re ending with certain questions, which is quite exciting.  To me, I can think of all sorts of sequels to this film, but this is just the beginning.”

Most likely the apes will take over the world at some point.  I don’t even want to imagine what silly writing will be applied to explain how endangered species of primates, that number in the thousands, can overtake a human population of over six billion humans!   Sometimes I think the apes have already taken over Hollywood and are writing the scripts for new movies.