The Effect Of Sugar On Arteries

At the turn of the last century (1900), the average american consumed around 20 to 30 pounds of sugar per year.  By the year 2008, the average american would be consuming 150 to 250 pounds of sugar annually.  Is it safe to assume that 108 years is sufficient time for the human anatomy to evolve to this adaptation?  With the advent of fat phobia, which began in the 1970s and reached a peak around 1990, fat consumption decreased in the U.S., while sugar consumption skyrocketed; and so too did diabetes and heart disease.  Yet, somehow we are still blaming those diseases on fat.

Heart disease is not a disease of the heart, as the name would imply, but an affliction on the arteries which eventually affect the heart.  Without arterial wall damage, cholesterol cannot begin to form a “plaque”, no matter how high your blood lipids may be.  There are many toxins that we ingest that can be problematic and inflammatory.  I would like to take a look at just one, but it’s the one that americans consume in the largest quantity.

During the six months I lived without intestines, I was fed by intravenous infusions of TPN (Total Parenteral Nutrition).  TPN consists of amino acids, vitamins, minerals, but mostly dextrose (sugar) and water.  Because I had virtually no intestines, my requirement for parental nutrition was very high.  I needed a 15 hour per day infusion, by a pump, delivering 225 ml per hour.   The sheer volume of fluids was too large for infusion via a peripheral artery in the arm, so a port catheter was surgically implanted in my chest.  The catheter entered my skin just below the collar-bone, where it was inserted in the superior vena cava and tunneled to within an inch of my heart.

There are only six branch arteries available for access to the vena cava and I was told by doctors that the high sugar content of the TPN would eventually cause the arteries to fail.  Sugar is quite caustic to the cells lining the arterial walls, causing inflammation and ultimately failure.  I was warned that at some point, all six access arteries would no longer be viable and I would die of starvation.  They said that it would take 3 to 4 years for all of the access arteries to fail and that was my fate.  The doctors at that hospital did not believe that intestinal transplants had been successfully achieved yet, so I was only given a couple of years left to live.

So, we can see that many doctors know the destructive effects of high blood sugar on the arteries, yet continue to recommend a low-fat/high-carbohydrate diet to avoid atherosclerosis.  There is a common myth today that high levels of fat in the blood causes cholesterol to begin to “stick” to the walls of the arteries. This is not the mechanism of atherosclerosis at all and is complete bullshit advertising created by the makers of cholesterol lowering drugs. 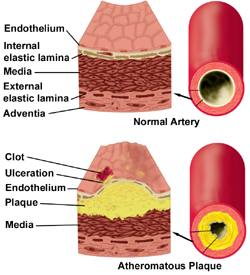 As this image accurately illustrates, it is when very small low density lipoproteins (LDLs) find their way behind the arterial wall, and become oxidized, is when plaque begins to form.  As we learned with the TPN, sugar is notorious for causing the endothelium layer to become ulcerated and breached.

Once LDL particles get trapped behind the endothelium, they oxidize, becoming a free radical.  White blood cells soon show up to “clean up” the damage and they too become trapped and oxidized.  This process causes more inflammation and damage to the endothelium, attracting more LDL and WBCs (White Blood Cells).  This is the beginning of atherosclerosis.   The plaque will continue to build until it ultimately ruptures through the endothelium, forming a clot which blocks the circulation.

If the erroneous myth of “sticky” cholesterol were true, we would expect to find plaque evenly distributed throughout the circulatory system, similar to the way minerals build in ALL of the pipes of a plumbing system.  We never find this to be the case or bypass surgery would not be possible.  Therefore, grafts from the leg arteries can be used to bypass the clots in the arteries of the neck and chest.  So cholesterol does not haphazardly cling to arterial walls willy-nilly.   Lipoproteins arrive at the site of  broken walls in an attempt to patch the damage until they can heal and inadvertently get caught inside.  If there were never inflammation and damage to the endothelium, plaque could not form, no matter how much fat was circulating in the bloodstream.

The high sugar content of the TPN also has a bad tendency to feed fungus and bacteria, so systemic infections are quite common in TPN recipients.  I personally had two bouts of sepsis during the months I was on TPN.  The first one was bacteremia caused by enterobacter cloacae growing in the medi-port.  The bacteria were being flushed throughout my system with the TPN and sent me into septic shock (a life-threatening condition).  The second time it was a systemic fungal infection caused by candida, which really thrives on sugar.

During the time I was in the hospital with sepsis, the infusion ports had to be surgically removed because they housed the infections.  A new catheter couldn’t be implanted until the infection was cleared up or it would just get colonized by the pathogens in my bloodstream.  They placed peripheral lines in my arms for infusion of the antibiotic medications.  But, there was still the problem of how to feed me.  To solve this, multiple peripheral lines were used in my arms and hands and PPN (Partial Parental Nutrition) was infused instead.  This contained less sugar and was not really enough nutrition to sustain me, but was better than total starvation.  These peripherals would only last a day or two before the veins would fail.  As time went on, it got much worse.  The damage to the veins was compounding and often times, the veins would infiltrate within two or three minutes of starting the PPN infusion.  It was very painful.

Once, a nurse made the mistake of hooking the TPN to a peripheral, rather than the port catheter.  When she started the pump, it immediately felt as though acid was pumped into the vein in my arm and then it failed and infiltrated within seconds.  So when I see some stooge chowing down on piles of rice and bread, followed by dessert and maybe a Snickers bar on top, I know they have no idea what that elevated blood sugar is doing to their arteries.  Even if their pancreas is fully healthy and able to eventually stabilize the sugar load, there is massive damage being perpetrated on their arteries by the elevated sugar levels, even within seconds.  This is damage that the body now must repair.  If small dense LDL particles (caused from high carbohydrate consumption) happen to find their way into that damaged area, you could possibly have the start of atherosclerosis.

I did gain some weight while on the TPN, which the doctors thought was a good sign.  I wasn’t so sure.  It was mostly visceral fat around my waist, but my arms, legs, shoulders and neck were still extremely thin, so the fat distribution was not a healthy one.  Doctors seem to only look at weight as a number and never how it’s distributed or whether it’s muscle or fat.  My muscles were withering away while my gut grew larger and they were happy with that.  It wasn’t until after I again had intestines and returned to eating real food, with plenty of fat and protein, that I was able to gain weight in my arms, legs, shoulders and flatten my stomach.  I actually weigh less now (less than the doctors want me to weigh), but I am much stronger.

Intestinal transplants are not available to everyone who loses their intestines.     There are only three criteria that qualify someone to undertake a transplant.   The first one is loss of access due to the dextrose (sugar) destroying the only six arteries available for infusion.  At this point, you have new intestines, but don’t have any arteries worth a shit going to or coming from your heart.  Great deal!

The second condition is liver failure due to the infused soy derived lipids.  I will not go into further detail, because I cover that in my post “The Truth About Soy”.  Find out the mythical health benefit of soy there.

The third condition is the one that made me eligible for a transplant.  This is due to multiple life-threatening infections via the infusion ports.  I suffered back-to-back systemic infections which nearly killed me.  Only about 45% of those who contract a systemic candida infection survive, so I consider myself lucky.  After my transplant, I suffered one really bad sepsis from pseudomonas (a gram negative rod), which has over a 90% mortality rate and put me into a coma.  I have had no infections since being on a low carbohydrate diet.

The one thing I did learn from all this is how caustic and toxic sugar is to the arteries and how sugar promotes and feeds infection.  Unless you plan to start running and exercising like a humming-bird on crack immediately after eating that cake or cookies, a lot of damage will be sustained by your arteries while you lounge and sleep — even though you have full intentions of working it off in the gym tomorrow.  The damage and infiltration in my arm didn’t wait until tomorrow, it happened right away.  You may burn off the fat later, but the sugar damage was already done.

The saddest part of all, was the fact that the doctors knew how much damage the sugar would cause to the arteries of TPN recipients, yet still continue to recommend a low-fat/ high-carbohydrate diet as a “Heart Healthy” one.  The doctors are either fucking morons or they want us to become sick.  I’m not sure which.  You take your pick.