Harvey Diamond once said, “You put a baby in a crib with an apple and a rabbit.  If it eats the rabbit and plays with the apple, I’ll buy you a new car.”   I will never understand why this slice of buffoonery gets repeated so often and it actually frightens me to know there are so many morons in the world that see any logic to this rhetoric.

First of all, if you placed a rabbit and an apple in a baby’s crib, they would eat neither.  Because we are not given the age of the “baby” in this fictitious situation, I am to assume that the child would be younger than 18 months to still be in a crib.  This child wouldn’t have the knowledge or skills necessary to kill, clean and cook a rabbit.  This doesn’t mean that the child is not the offspring of a meat-eating animal.  If I were to place a live bunny in a crate with an eight week old puppy or kitten, chances are good that they would also play with the rabbit rather than eat the rodent.  Is Harvey suggesting that this proves that cats and dogs are not meat-eating animals? .

The human infant wouldn’t choose to eat the apple as Diamond so confidently insinuates.  A pre-toddler doesn’t have the developed incisors to bite into a whole apple, just as the puppy or kitten don’t have the large canines needed for dispatching the rabbit.  Now if Harvey is suggesting that we peel and slice up the apple and place it in the crib, then there is a chance that the child might take a stab at it.  But is a peeled and sliced apple a fair comparison to a live rabbit?  Babies will stick anything in their mouth in an attempt to eat it.  My baby brother used to pick up dust bunnies from under furniture and place them in his mouth. Would a dust bunny qualify as a rabbit?  It’s about as absurd as Harvey Diamond’s scenario.

Here in Florida we have zillions of small lizards named “Anoles” that scurry around.  A friend’s two-year-old daughter once caught one somehow and placed it in her mouth and bit it in half.  I don’t know if she had the choice of an apple but opted for the reptile instead, but I doubt that mattered to the lizard.  My sister was the nanny to two children.  The little girl she took care of once caught a millipede, placed it in her mouth and crunched down on it.  Anyone familiar with millipedes knows that they are not only armored, but can spray a hydrogen cyanide gas, which burns flesh on contact.  The child was in considerable pain from the chemical burns to her lips and tongue.  Unlike Harvey, I won’t use this as a counter argument that we are carnivores based on these examples, because children will stick a lot of things in their mouth.

Pediatrician Dr. Laura A. Jana lists the following as the top ten items swallowed by babies:

I guess all of these items are on the menu at the Diamond’s house, beings they use infant’s eating choices as their dietary recommendations.  Many children have eaten their own feces, this doesn’t make us descendants of the dung beetle — but it may give new meaning to the ingredients of the pu-pu platter served at the Diamond’s dinner table. 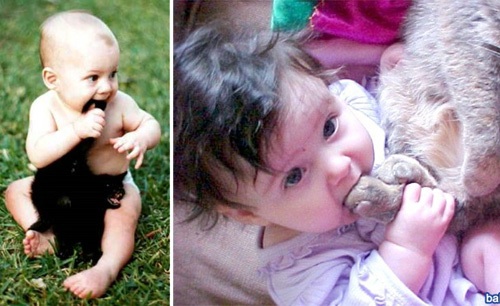 But the real stupidity of this cliché is the offering of a live bunny to any infant mammal, whether it be carnivore, omnivore or herbivore.  This test is too easily manipulated, which is why it lives only in a proverbial sense and has never been put to a test.  I am willing to conduct the test –- after all, there is a new car at stake here.

I believe that Harvey Diamond, wanting to promote a vegetarian diet with another example of pseudoscience, would propose a peeled and sliced apple offered with the living bunny.  This test would show too much bias towards the fruit.  If we wanted to level the playing field, we would kill, cook and slice up the rabbit into tiny pieces and offer it with the apple.  Chances are probably 50/50 that the child could choose either the cooked rabbit or sliced apple.

This experiment is pointless and proves nothing about human dietary needs.  If Mr. Diamond is going to use children as the litmus test as to what foods are best for humans to consume, then vegetarianism would fail royally on the fact that most children refuse to eat their vegetables, but readily gobble down hamburgers.  In conclusion, if we run Harvey’s test with a live rabbit and a whole apple, Harvey is mistaken that the child would play with the bunny and open their mouth wide and crunch into a crisp apple with their naked gums.  If we choose my rules of a cooked and sliced rabbit and whole apple…. well… Harvey, can we talk about which model and color car I’m getting?

I would really like to hear Harvey’s reply to this, but I doubt that I ever will.  Enough said.