Here is another retarded soundbite recital I hear repeated all too often.  The basic theory is that cattle emit methane gas as a result of digestion and those clouds of hydrocarbons rise up to the stratosphere and trap in heat.  They claim that this is one of the major contributors to the recent warming.  Of course, it’s the fault us meat eaters!  We have helped proliferate ruminant species beyond anything that the world has encountered before, which will ultimately lead to the destruction of all….. Bwaahahahaha…. Sorry, it’s hard to keep that going.

What kind of simpleton is convinced that there are more ruminants now than ever before?  Let’s break out our history books and take a look at a time, just 233 years ago.  It was 1778; North America was in the throes of a revolution and the world was also suffering a mini ice age.  As Washington’s troops froze at Valley Forge, record low temperatures stretched across the globe.  At this same period in time, North America also had a buffalo population estimated at over 75-100 million.  The amount of cattle in North America presently is estimated to be a little less than 100 million.

You also have to take into consideration that the population of moose, elk, caribou and deer were much higher than they are today.  All of these animals are ruminating mammals, just like the cow, and create just as much methane pound for pound.  That’s right, they fart as much as cows and many of them are larger animals than cattle, so their gas emissions are considerably higher.  So with all that methane being created on the prairies of North America at the time, how was there a mini ice age?  Because this theory is a bigger load of crap than any cow pie gassing off in some pasture.  Maybe it’s the greenhouse emissions gassing off of all the piles of vegan bullshit that are destroying the environment.

Let’s all try to keep a straight face and pretend we agree that it’s cow farts causing some type of global warming.  Then how is the solution of not eating meat going to fix it?  Are cows going to stop farting because we stop eating them?  If we look at one of the nations with the highest number of vegetarians on earth, we would expect to see a reduction in cattle based on this vegan sales pitch – right?  Well India has one of the highest populations of vegetarians, yet the estimated number of living cattle in that country are over 400 million!  More than four times the meat-eating United States!

Does PETA have a secret plot to destroy all of the cattle once they are set free?  This would be the only way to put a stop to the emissions, and we all know that PETA are no strangers to the euthanization of animals. [article]  And once the cattle genocide is completed to save the vegan from their fear of global warming, won’t there be huge methane emissions from the decomposing cattle corpses?  The reality is that the cow doesn’t produce these gasses, but the bacteria within the cow.  The same type bacteria will ultimately decompose a carcass, releasing methane as a by-product.

When a grain field is harvested, it is only the seeds that are taken and the rest of the plant is composted; releasing tons of methane into the atmosphere as it decays.  Around 22.8 billion gallons of diesel fuel is consumed annually by tractors, harvesters, irrigation pumps and other machinery for agriculture. 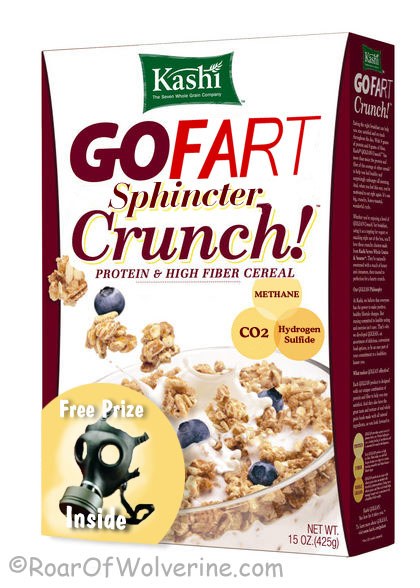 Add that to the fact that rice paddies produce around 13% of global methane and I fail to see how a vegetarian diet lessens the emission of carbon gasses.  Those numbers could ten-fold if the entire world changed to a solely plant diet.  As usual, the perpetrators of this fabrication haven’t thought this one out too far, but then again, the words “thinking” and “PETA” have never been synonymous.  They react based on feelings, never critical thinking.

And lastly, what about the increased emission from the vegan themselves?  How is a vegan fart superior to a cow fart?  Because of their high fiber diet, vegans are more flatulent than their omnivorous counterparts.  If the entire human race become vegan and billions of colons struggle to digest bran fiber, soybeans and Kashi Gofart cereal, what will become of the atmosphere when they all unleash their cocktail of carbon dioxide, methane and hydrogen sulfide?  At some point an entire vegan population would make an equivalent contribution to the carbon emissions as today’s cattle.

All propaganda and the Gore-y half truths aside, carbon elevation does not cause global warming, it is the warming that causes the rise in carbon emissions [source] [second source].  Proof of this is that the rise in CO2 levels always lag behind the rise in temperature by an average of two years, making the entire theory of carbon causing global warming complete bullshit.  As temperatures rise from solar activity, organic matter decays and gasses off more quickly (does your garbage smell worse on a hot day than on a cold day?  Of course it does.).  Solar activity would explain why temperatures have risen equally on Earth, Mars and Venus within the last few decades.  I guess it’s time for the Martian and Venusian to “go green” and drive hybrids.   It is nothing humans cause, nor can prevent – but is quite profitable to those who exploit the Gore-y lie.