Only One Mammal Survives On Low Fat Nutrition

“Professing themselves to be wise, they became fools” – Romans 1:22 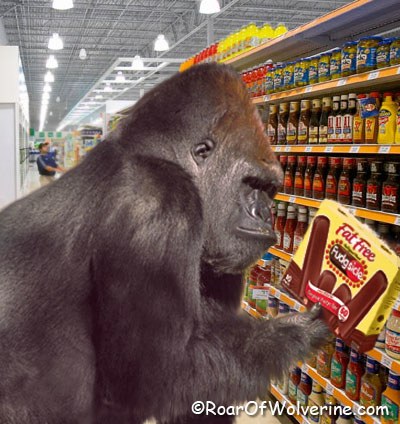 When hyper-education overrides instinctual drives and common sense, I can’t help but think of this passage. Humans have wasted the last fifty years attempting to make a science of the benefits of a low-fat diet. Though it is counterintuitive to all dietary traditions, by using enough smoke and mirrors, accompanied by plenty of “soundbite recital”, it was packaged and sold to an otherwise intelligent people. Sometimes we can over-think ourselves into stupidity.

The influence of the low-fat theory has even found its way into many diets that claim to be of paleolithic design.  Loren Cordain and Arthur DeVany promote meat-eating, but still stay within the arena of political correctness by advocating the trimming of fat and using only the leanest cuts of meat.  Lipophobia has become a religion of its own. The fear of fat has been so indoctrinated into our culture that even in the face of millenniums of safe consumption and tons of scientific evidence to the contrary, we still cling to it, even when advocating meat-eating.  It has to be the largest brain-washing ever perpetrated on the human race.

But what if I were to tell you that human beings are the only mammal on earth that have adopted low-fat nutrition?  All other animals enjoy nutrition that is rich in fat — and not just any fat, but saturated fat.  I learned the hard way how saturated fat production in the colon is very important in maintaining the health of the colonic walls. This saturated fat is created from plant fiber and not from ingested animal products.

Though all but around ten inches of my small intestines were removed, about two feet of colon had been spared.  I was left with the rectum, sigmoid and a few inches of descending colon.  The illustration below displays all of the intestines I had left before my transplant. 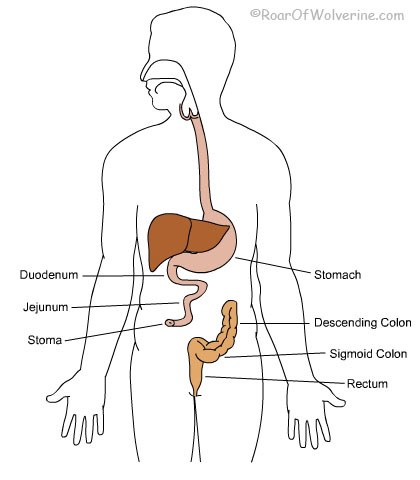 Because of the nervous complexities of the rectum, doctors are unable to transplant that section of the colon.  Individuals that lose their rectum due to Crohn’s, UC or cancer cannot have a colon transplanted and must live out the remainder of their lives with an ileostomy or “J” pouch”.  So it was important that the doctors save my native rectum, so I could receive a colon with the rest of the transplanted intestines. This was no small task.  The existing colon parts were no longer connected, so there was no material passing through them anymore.  Everything I ate passed out through a stoma made from the jejunum.  Because the colon was not being used, it became inflamed and started to bleed.  I was suffering from an affliction called “Diversion Colitis” and was losing so much blood as a result, that I required a transfusion every two weeks.  It was very painful.

Indigestible fiber within the stool is devoured by the bacteria of the colon, who then produce a short chain fatty acid (SCFA) called “butyrate” (butyric acid) as a by-product.  In the human colon, the butyrate is absorbed by the cells of the colon lining and used for food.   Butyrate is very important for colon health, and without it, the colon becomes inflamed and ultimately ulcerated.

So, how is all of this relevant to the fact that all mammals maintain health via a high fat diet?  First, let us take a look at a non-ruminant vegetarian mammal like the western lowland gorilla.  Their diet is made up mostly of leafy green vegetables, some fruit and small amount of insects.  Their food is low in fat and available carbohydrates with varied protein, but very high in indigestible fiber.  The gorilla’s macro nutrient per 100 grams of dry matter intake would look something like this:

This puts the caloric intake of available macronutrients at about:

From this we would conclude that the gorilla enjoys a high protein, moderate carbohydrate, and low fat diet.  But remember what we learned from the diversion colitis and how the colonic bacteria convert dietary fiber to butyrate; a saturated fat.  Because the gorilla has a much larger ratio of colon than does the human, fiber is converted to SCFA, changing the macronutrient absorption to an energy ratio of:

Giving the gorilla a total intake of:

The gorilla has six times the absorption available from the colon than does the human, which also means they have many times the amount of bacteria available for digestion of plant cellulose.  The high fiber in the gorilla diet is fermented by the colonic bacteria, yielding short chained fatty acids (SCFA).  In other words, the indigestible carbohydrates are converted to saturated fat and absorbed into the blood.  A human eating a similar diet would just end up crapping most of it out, receiving little benefit.

The gorilla can obtain about 65% of their energy from their hind-gut, whereas the human only receives about 10% from the colon.  The butyrate created in the human colon is mostly used locally by the cells of the intestinal lining and only a very insignificant amount is absorbed.  This is why a human can live without a colon and an ape can’t. (see my post “The Planet That Went Ape!” for more on ape vs. human gut ratio)

Much like carnivorous and other omnivorous animals, humans must receive fatty acids through diet.  When we eat a low-fat diet, we are not simulating the gorilla or chimpanzee diet, we are receiving a diet low in fat and very high in available carbohydrates.  The chimp and gorilla are receiving many times the dietary fat from their gut bacteria than we do on the same diet.  This is most likely the reason why gorillas fed meat in captivity suffer from hypercholesterolemia and die.  Because they can convert fiber to high amounts of saturated fat, any extra fat in their diet creates an overload of serum lipids.  (Chimpanzees are more omnivorous than gorillas and do better than gorillas when fed meat in captivity).

But what about the other herbivores?  Besides having multiple chambered stomachs, ruminants have one very large stomach chamber reserved for plant fermentation.  This stomach is called the rumen, hence the name ruminant. 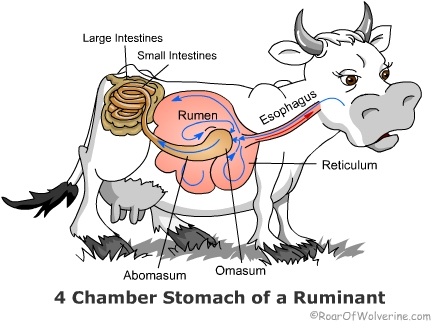 Ruminant’s stomachs house bacteria only found in the colon of a human.   These bacteria readily convert indigestible carbohydrates into short chained fatty acids, which are absorbed into the bloodstream of the ruminant animal (goats, sheep, cattle, deer, etc.).  At the blood serum level, these animals are receiving a butt-load of saturated fat.  If ruminant animals did not require high amounts of saturated fat, we would not find so much of it in their milk.  Their offspring does not have the bacteria necessary for the fiber conversion to SCFA when born, so like us, they need it from their diet.  Once they have eaten grass for a period, they plant and begin to culture the bacteria necessary to make their own fat from fiber.  (The human stomach remain sterile because of the high acidity.  Ruminant animals have little to no acid in their stomachs)

Once the young ruminant animal has established a healthy bacterial culture, they no longer need dietary fat, but are still receiving the same high level of fat as they were when nursing.  Where do you think all that saturated fat found in their milk and meat comes from?  Because they can manufacture such a large portion of fat from the fiber in their diet, any dietary fat would create a fat overload.  This is probably why a ruminant animal shows no interest in meat or other fatty foods even when available.

Ever notice the way people tend to begin to salivate with one whiff of a pot roast or the smell of steaks on the grill?  You don’t see the same Pavlov’s dog  reaction to broccoli boiling from a human and cabbage cooking smells like the bathroom at a Taco Bell.  Though they are completely healthy foods they are hardly as appetite stimulating.  No herbivore would react in such a manner to the smell of meat cooking, but do show the same level of excitement towards fresh grass.

We are constantly being told that the food that doesn’t excite us is what’s best for us.  Anything that tastes good must be bad for us.  If we were an herbivorous species, we wouldn’t have to threaten children to eat their vegetables.  I raise cattle and have yet to see a mother cow threaten to withhold her calf’s dessert until he finishes that acre of grass.  Their offspring immediately have a strong urge to eat grass on their own.  Telling us that our vegetables are the healthiest thing on our plate begins as a mental reinforcement to get children to eat the one thing on their plate they desire least.  The conditioning becomes so strong, many cannot let go of it  even into adulthood.  This has even created a major bias in nutritional research.

Everyone wants to debate the issue based on questionable studies and theories of  biochemical reactions of macronurients and human hormones and it all becomes complicated and sounds very impressive.  History has taught us that if you want to sell a bogus idea, make it sound real complex.  It would seem logical that our ancestors knew nothing of biochemistry.  Just like the ruminant calf, they sought after whatever tasted good and was available.  We evolved to get the most out of the foods our ancestors ate. 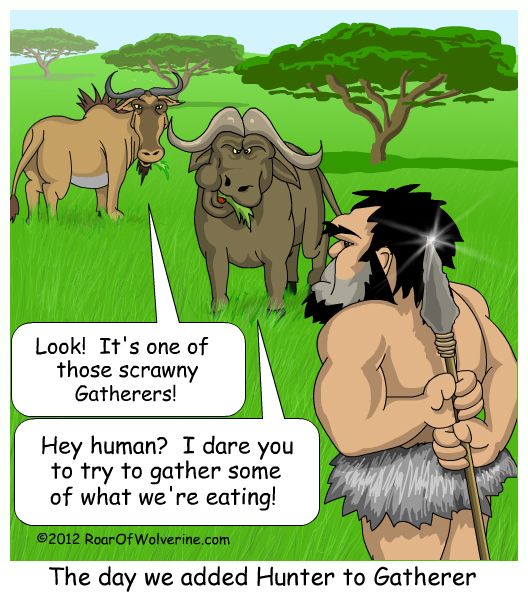 Our fore-bearers began eating meat, maybe because they noticed that carnivores had more free time on their hands, whereas herbivores spent their entire existence eating and taking a dump.  Maybe they were just drawn more to the smell and taste of meat.  Maybe herbivores just pissed them off, (as vegans usually do)  so they wanted to kill and eat them.  Either way, this adaptation allowed their brains to grow, their colons to shorten and made them less dependent on digestive bacterium.

Humans began making this trade-off over a million years ago.  We surrendered the herbivore’s energy gobbling hind gut that house the bacteria which manufacture the much-needed SCFA from plant fiber, so we could have a larger brain and be adaptable to different environments.  The only drawback was, we were forever committed to receive our fat from external sources.  Now that our brains have grown to an intellect that can jump to erroneous conclusions based on complex, confusing and contradictory scientific observations, our health as a species has deteriorated ever since.

We are the only species trying to live healthy on a low-fat diet.  Our ancestors taught us how to eat healthy.  Our instincts tell us what to eat.  Your grandmother knew what to eat.  But we have become so much smarter than them that our intellect overrides our sense of smell and taste, and we scoff at our predecessor’s lean, robust bodies and healthy hearts.  We brag at how much healthier our low-fat diets are than the high fat affair of our idiot grandparents and ignore the fact that we have become morbidly obese as a result of the much higher intake of carbohydrates.  In other words, “Professing ourselves to be wise, we became fools”.